It’s hard to tell who’s enjoying it more, 17-year-old Neita Balle or the 17-year-old horse she’s riding.
But here, at granddad’s place on top of Pukekohe hill, it’s a scene which is often played out when the family gathers for Christmas or Easter or birthdays.
It’s one of racing’s best happily-ever-after stories, the daughter of trainer Derek Balle sitting atop their beloved Sunny, nine years after he was rescued from death row.
When Sunny, race name Galleons Sunset, was retired from racing after his final start on Christmas Eve in 2009, his chances of seeing another festive season were next to nothing. 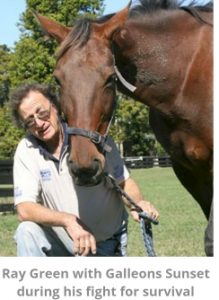 Diagnosed with a chronic fetlock joint injury, where an almost total loss of cartilage meant bone on bone pain, Sunny was limping round a paddock at Lincoln Farms in Kumeu, owner John Street trying everything to save him.
No expense was spared, no treatment rejected, as Street battled to repay his Interdominion Trotting Grand Final winner for the thrills he gave him on the track.
But in the end, when it became obvious the injury would never heal, and he might have to be put down, it was Balle, who’d formed a real bond with the horse during six seasons on the track, who proved the horse’s guardian angel.
Balle boxed Sunny for a month at his Pukekohe stable, then gradually let him out into larger yards, as the injury settled down.
And when he was eventually stabilised, Balle took Sunny out to his dad Ken’s place on the hill where he became “the old man’s special project to nurse back to health.’’
Ken Balle had been on that memorable trip to Melbourne the previous year when the horse scored a big upset to take the Interdominion crown.
“He’s not a big bettor, but he backed him that night and, while he’s never been confident around horses, a bit scared, he was fine with Sunny,” says Derek Balle.
“I couldn’t believe how quiet he was for a horse who always wanted to rip and tear in the cart. He’s got a lovely nature and a big personality.
“When the old man goes into his paddock now the horse comes up to him and rests his head on his shoulder.
“He’s one of those horses who just loves a pat and loves kids. He just loves being ridden and getting attention.’’
These days Balle’s niece Eva, 12, is always first in line to ride the old fella who waits at the gate for the chance to talk to people – or get some carrots.
Incredibly, for a horse who could once hardly walk, Sunny is now getting round as if nothing had happened.
“He’s just got better and better and in the last 12 months he’s the soundest he’s ever been and gallops around the place.’’ 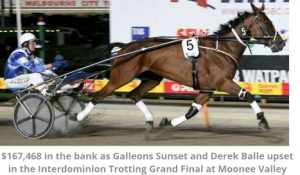 Best of all, Sunny has become a mentor to all the young horses Balle sends there.
“He’s worth his weight in gold. When the young horses misbehave or run round like crazy things he gives them a kick or a bite and they take their cue off him watching him cruise around. They’re half broken in when they come out of his paddock.’’
Looking back, Balle can see how Sunny’s joint must have been worrying him for longer than they knew – “He always struggled right handed.’’
“His potential was untapped really, he was only really starting to learn his ringcraft in the top grade. He could have won a hell of a lot more races. 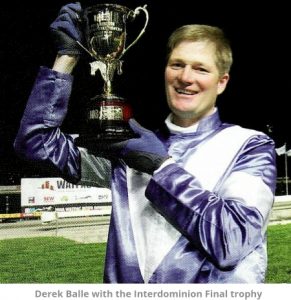 “He had super speed, the speed of a pacer, and could run anything. If you worked him in behind he’d run you a 27 quarter, and that was on the old track at Pukekohe. We never got to see it at the races because he was such a good beginner and always seemed to end up in front.’’
The second best horse Balle has trained, behind Martina H, Galleons Sunset won 14 races and $343,849, but ironically while Balle drove the Sundon horse in his greatest triumph, the $250,000 Interdominion Final at Moonee Valley in 2008, he wasn’t the official trainer.
Balle had left Galleons Sunset with leading trainer Chris Lang after he won the Bill Collins Mile two and a half months earlier – with the equine virus scare, it was impossible to bring him home.
Balle jokes Galleons Sunset should really have been in the name of Lang’s wife Sharon because it was she who turned him around in the week leading up to the race.
“He hadn’t been racing well – he only got into the Final through running fourth in the Bendigo heat – and I told her he was tired.
“She walked and rode him, did dressage with him in her arena, and he just loved being under saddle.’’
These days it’s Balle’s daughter in the saddle as Sunny continues to enjoy his once unlikely retirement, with Street still contributing to the grazing costs.
“He’s had a good life.’’